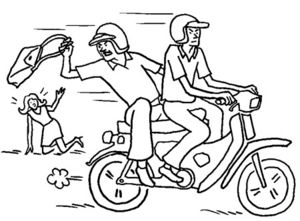 The other day as I was settling my kids for their afternoon nap, we heard a loud “Vrrooom Vroommm” motorbike sound followed by a lady shouting for help. This happened right outside my house. Two men on a motorcycle had smashed her car window and took off with her handbag which she had left lying on the passenger seat.

Sounds familiar? This probably has happened to your family members, friends or neighbours. They are not reported in the media because no one got seriously injured or died in the crime. BUT it is scarily common. Much too common.

In another incident, hubby was at a mamak stall with a friend. While they were talking (they were sitting in the restaurant but quite near the open entrance) someone grabbed the friend’s handphone which was lying on the table and took off in a motorbike of an alliance who had been waiting.

My sister has had her handbag snatched before too, while she was struggling to open her car door one day. And so has my sis-in-law, while she was struggling to open her house gate with child in tow. Why? Because they were distracted at the time. And I am sure that anyone reading this will nod their heads and say, yes, yes, this has happened to my ______ (*fill in the blanks*) too.

The sad thing is they always target the weak and or helpless(meaning women or mothers with young children, older people etc), the ones who were not careful enough (as in the above incidents those who left their belongings visually tempting enough to the bad guys) and those who were distracted.

WHEN WILL IT STOP? JUST WHEN?!!

It seems to be getting worse these days. I don’t feel save anymore, not even outside my own house. 🙁

4 thoughts on “Crimes unreported by the media”