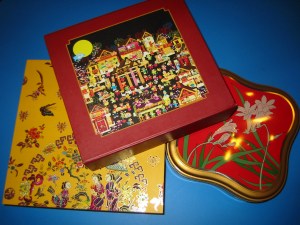 The mooncake battle has begun. I saw it with my own eyes. It started about 2 weeks ago. A little early since Mooncake Festival 2007 or the Mid Autumn Festival isn’t until 25 September 2007 this year.

However, the battle cry has begun. Everyone is joining the battle too. From specialty mooncake makers, to bakeries, hotels, restaurants, ice-cream shops and florists too. May the best packaging win!

At 50sen a bite and more, its certainly a battle worth fighting. Afterall its only once a year. Still, going into battle 2 months before the war seems just a little too early for me. I think I’ll wait a month before tasting my first mooncake. It doesn’t come cheap and its not extremely healthy to consume in large quantities. Lol!

9 thoughts on “The Battle of the Mooncakes”