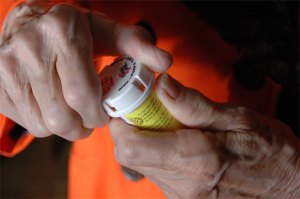 We had dad over for the weekend since sister was away cave exploring with her family. We took dad makan-makan and jalan-jalan. I hope he enjoyed himself even though he was quiet most of the time.

We took dad to the pasar malam, to the shopping mall, to the park, for a late evening drive around town to watch the night lights. We took the SMART tunnel and the kids were really excited about that. We could see KLCC from afar and we drove till it loomed big and majestic right before our very eyes. We got down in the slight drizzle and oohed and ahhed like suaku tourists. We oohhed and ahhed too at all the colourful night city lights.

We took dad to eat pasar malam food for dinner, otak otak for lunch and emperor taufu for dinner and beef noodle soup for breakfast and A&W for tea. Although the food wasn’t exactly healthy but it was still nice to see him tuck in. At least his appetite is still good.

We borrowed a kungfu movie which he liked and watched it with him. He fell asleep halfway through but got up to see the ending, so at least he saw the beggining and the end.

Dad was quiet mostly but at least he talked and played with the kids a bit. Kids are great therapy for the elderly. Its nice for the elderly person to have the inhibited hugs from the little ones who were all over him.

Dad’s hygiene isn’t what it used to be. Its hard to get him to bathe,Â brush his teeth, trim his nails, cut his hairÂ or even to change his clothes. I suspect its because he doesn’t know how to or it simply takes too much effort for him to figure out what to do next. He tells us “I don’t know what to do next when I get up each morning. I just want to go back to sleep.”

Because he is dad, its hard for me to help him change so I just prepare fresh clothes for him and remove the worn ones. He had worn his shirt to sleep and as I stood there with the fresh one and suggested that he change his shirt, I feel a great sadness in my heart as he fumbles with the buttons and say “I am very clumsy.” He had gotten his buttons on upside down and I tell him to take his time and say that he will feel much more comfortable in a new shirt. I couldn’t get him to bathe but I prepared a warm towel for him to wipe his face and neck with.

He doesn’t know how to change to go out unless he sees everyone nearly out the door so its no good telling him before hand to get dressed. I wait till we are all in our shoes then tell him that we are going out and its time to get change. This makes it a lot simpler for him.

Sister had prepared two medicine boxes for him, one for daytime and another for night. I take out his medicine box and points to the correct day and he looks at me uncertainly for confirmation when he takes it out to make sure that he has eaten them. I can sense his lack of confidence.

I am experiencing what many have experienced and some may experience as they grow older. I have become a parent to my parent. It is hard, emotionally and stressful for everyone. It is sad to know that the parent you have looked up to all your life is suddenly like a child now who depends on you to tell him what to do next.

Sometimes I source the internet to read up about how to take care of the elderly or handle a parent who has dementia and I came across this really good article about this role reversal process. Here is the link to that article : Becoming ‘parent of your parent’, an emotional wrenching process. Perhaps others who have to go through this too will find it a good read too. One thing mentioned in the article which I find very true is this….

Yes, it does strain the family. What do people argue about? Expenses and time spent of course. The greatest of all evils which is “Money” and the most important and hardest to get resource of all which is “Time”.

As a parent now myself, I know that this is my second greatest fear. (The first is kiasiness – fear of dying and leaving my kids while they still need me). The second is fear that someday my kids will have to look after me and it will cause them the same stress that we siblings face now. I certainly don’t want my kids to fight about who is looking after me less or more or who is spending less or more money on me etc.

Ooh… I sound dreary today. Must be the middle of the week or the fact that my period is late and I’ve been having headaches upon waking daily. I’ve got to report both to my doctor and hope these headaches are nothing sinister.

Someday our parents will grow old

10 thoughts on “Parenting our Parents”

Leave a Reply to AM Cancel reply