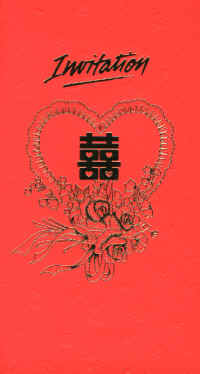 I have been summoned to attend a wedding dinner. (in Chinese, this means being given a wedding invitation card with your name on it). I usedÂ to receive this summons a lot during my 20s when lots of friends were being wed. I still got them in my 30s but its dwindled a lot by now.

Receiving one of these things often puts me in a dilemma. Though Chinese, I don’t really know what is the “cultural” expectations. In other words, I don’t know what to do lah.

So what is the expectation, can someone please tell me? What is the standard? There is KL standard etc etc. The Chinese must protect their own “face” so they often give in to this “ransom” for money angpow and apparently there are certain standards to comply to (meaning a minimum amount to give) irrespective of whether you attend the wedding dinner or not. Comply to these standards or forever be known as a miser or stingy poker.

So what is the standard? I have my own theory. To me, if I get this summons from someone close to me, I would give them something irrespective of whether I attend or not. If I attend, I would make sure that I at least pay over and above the cost of my dinner so that my friend won’t have to pay for me to attend their dinner. If I can’t make it to the dinner, I would give my friend something too because I want to, not because I am obliged to.

This is probably the same reasoning why people are expected to pay more give a bigger angpow whenÂ attending a dinner in a hotel compared to a dinner at a Chinese Restaurant for example.

Once, I received this summons from a colleague on another floor which I hardly know. I did the unthinkable. I chose to ignore it. I did not pay up the summons lah. Some say that is very rude. Aiyah, so many rules one. If you receive it from a subordinate, you must pay more, if you receive it from your superior, less etc etc. To me, I hardly know you, so why should I be held ransom? But some say must at least give a token lah blah blah blah.

On the other hand, if you are the wedding couple, handing out this summons can also give you headache. You have to planÂ your seating arrangement and number of attendees so that you don’t explode your budget or run out of food or seating places but sometimes you invite just one person and that person brings a legion of relatives. Sometimes you’re not sure whether its “nice” to just invite someone without inviting their spouses etc etc. More rules again.

There are also rules in giving out the angpow. Apparently you can put it in the same envelope that you receive together with the summons so that the wedding party immediately knows who its from since your name is written on it. Is that right? I’m also not sure about this practise.