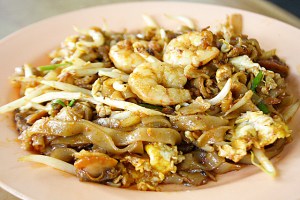 I love food. I love trying out new foods. I think how we view food is in a way related to our upbringing a little.

I think my love affair with food began from young. Mum died early so it was just Dad and us. Dad showed his love to me with food. He was a policeman. When he came back home from late night duty, he would bring home special foods for supper for me. I would wait for him to come home eagerly. Sometimes he took me out to places to try new foods.

Later on, as a single working adult, I continued going out to try new foods with my friends. I continued to eat out often with Dad too.

Hubby on the other hand is not adventurous with food. As a single working adult he would often takeaway fast foods and eat those. He would have TV dinners ie eat his takeaway food in front of the TV. (Thats my own definition for TV dinners). When he finds a type of food he likes, he would eat it often, like every other day.Â  According to him, he has no time to think about food so he just eats what he likes often. This makes it easy for me. Since he has such an easy to please palate, all I need to do is cook his favourite food everyday. Haha.

Earlier on in our relationship, we had a lot of food related arguments because of the way we are so different in our love for food. However, now we have sort of gravitated towards each other in a good food way. He has come to be a little bit more adventurous now and I don’t mind having repeat TV dinners.

What about you? Do you eat to live or do you live to eat? 😉

9 thoughts on “My love affair with food”