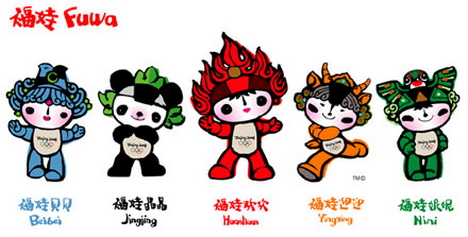 The Olympic Fever begins today on the 8th Day of the 8th Month of the year at 8:08:08pm. You know Chinese lah. Everything also must be auspicious. 🙂

I read from my kids McDonald’s newsletter that there are five mascots. They are…

Put them all together and they form the words “Bei Jing Huan Ying Ni” (Meaning Beijing Welcomes You). See? I know a little bit of Chinese. I’m not such a banana afterall. 😉

Anyway, I am rather excited to see the opening ceremony tonight. I think the Olympic Games is a good opportunity to expose or teach the kids about the different countries of the world as well as the various types of sports. Unfortunately, I don’t have Astro, so I can only watch a delayed live transmission by RTM 1. What to do? Miser don’t want to pay. Have to watch delayed loh. Hopefully the transmission will be clear and we won’t miss anything.

For those who are interested to know more about the Olympic Mascots, you can check out this : Beijing 2008 Olympics: What are the meanings of the five mascots?Â Or you can simply enjoy the following YouTube video on The Mascots of the Olympic Games. The background music you hear in the video is a Chinese Folk song called “Mo Li Hua” or “Jasmine Flower”. My girl sings it in kindy. Very nice.