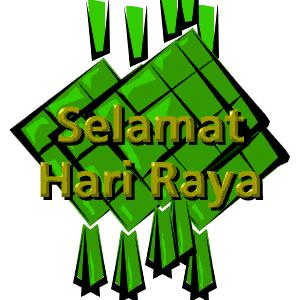 Hari Raya is just a week away. The kindy will be closed from Wednesday to Friday so it will be a very long weekend for us. Hurrah!

I want to take this opportunity to wish all my readers Selamat Hari Raya and Happy Holidays. I used to have a number of Malay readers but I don’t know where they are now. I noticed in a blog community, birds of a feather tend to flock together. I do not think its because of racial divide. Its just that most people identify better with a blogger when they speak the same lingo.

While I was working, I still had many friends of other races too. I used to work as a Conference Organiser and whenever we had a conference or seminar during the fasting month, we would provide dinner vouchers to the muslims who could not join in the other participants for lunch. That is how racially tolerant we are and how respectful we are of each other. We enjoy each other’s foods (accept for those which we can’t partake in for religious purposes)Â and we often have open houses for friends of every race during festivals.

I remember once, one muslim colleague invited us back to her kampung together. We drove there, spent the night at her house and went visiting with her. I was entralled by the beautfy of one of the kampung houses we visited. We had Muslim, Chinese and Indian friends among us. None of us felt any racial divide. We were just a bunch ofÂ young girls laughing and enjoying ourselves.

And now, all of a sudden there is talk of a racial divide. I think its silly isn’t it?

Hopefully, when we have finally settled down politically, all of this talk will blow away and we will be back to being peace loving, racially tolerant, proud Malaysians again.

In the meantime, Selamat Hari Raya and be careful on the roads.