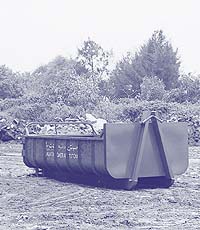 At least thats what it feels like right now. My neighbour has one of these rubbish containers sitting in his porch for his renovation rubbish. The wall dividing my porch and his is rather low so I can see all the rubbish thats in there.

Well, thats ok, accept for the fact that the workers throw their tapau food containters in there and then the flies come and  hover around. Now, when I step out of my house, it stinks and the flies try to fly into my house. Geezz!

Yesterday, I was busy spraying insecticide at the flies while the worker looked at me nochalantly.  I felt like spraying some over his face as well.

I saw the contractor last weekend so hubby quickly spoke to him about the food containers. He immediately asked his worker to remove the container. The worker looked at me unhappily as he removed it but the next day, new food containers replaced the old ones. Sigh.

I can’t keep on complaining. Who knows what those unhappy workers may decide to do? Maybe drop a brick or two on my car windscreen perhaps or worse? Speaking of which, they DID accidentally drop a brick into my back porch yesterday and they broke a pipe of mine when they dropped a pail onto it and then they tried to cover it up by placing my broom over the broken pipe. They also broke my roof tiles and placed a dirty shirt over it. We spoke to the contractor and they will replace the roof tiles.

If you still remember, earlier on they built their back wall onto my side of the property while I was away during CNY so now they have got a slightly bigger back porch by an inch or two. How annoying is that! The contractor and owner said they would tear it down when we complaint but then it was just completed. Do you think the workers will be very happy to tear down their hard work right after completion? I think not. So we decided to leave the wall alone but we reminded them not to enchroach into our area any more.

They’re extending their back and front rooms so now when I look out of my window, I get to see their beautiful wall instead of the trees, sky and road that I used to see before. Hmmm…..

My drain’s all clogged up now too, with cement, bits and pieces of walls, nails etc. Every weekend I have to clear it out. Last weekend, I cleared out 8 bags of rubbish from the drain. 8 bags! Me and the maid had to use my little garden tools to dig into the greasy water to come up with those 8 bags of rubbish, consisting mainly of sand, stone and cement. The water is greasy because the drain is clogged so it gets filled up with other people’s dirty, greasy, kitchen sink water and dunno what else.

My other neighbour is not doing any clearing so the rubbish has travelled to his side as well and now the drains aren’t flowing well anymore making it a great breeding ground for mosquitoes and you know how deadly the mosquitoes are these days. I’ve complained about the drain before and they came over to clean it once but the very next day it was back to more of the same. I can’t keep on complaining because who knows what those half dozen or more of Indon workers may decide to do if their wrath is incurred. I spoke to the new neighbour several times as well as to his contractor and they are apologetic but …..

I wish they would finish their renovation works soon. Worse still, is the fact, that the neighbour next to them has decided to join in the fun and is now renovating his house as well. He’s got one of those rubbish dump containers at the back of his house.

I thought we’re facing a slowdown? Why is everyone renovating their house?!! Ok. Finish ranting. *Slowly let out remaining steam from mouth and nostrils* I feel better now. Have a good weekend everyone. I wonder how many bags of sand awaits me in my back drain this weekend. *Let out more steam and a little smoke*

13 thoughts on “I’m living right next to a rubbish dump!”