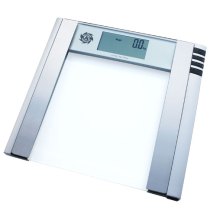 I remember sometime before Chinese New Year, I was telling myself that I want to lose 5 pounds but then I ended up with an extra 5 pounds instead! Now I’ve got to lose 10 pounds instead of the original 5 I had intended but those horrible scales just won’t budge!

I exercise daily or almost daily (for health’s sake first and beauty second). I cut down my intake of rice. But the scales won’t come down! It just won’t! Although I must admit that during weekends my exercise regime and diet goes flying out the window. Whooooooo! Bye! Bye! And thats when I laze around like a potato on a couch and pig out on everything else that I’ve missed out all week. Hehe.

But can you imagine that. Just 2 days of pigging out versus 5 days of exercise and diet regime and thats enough to tip the scares higher and higher. Its unbelievable. My only conclusion is …… there is something wrong with my new digital bathroom scales. What do you think?