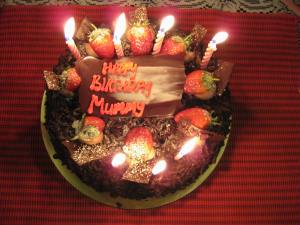 Yesterday my wish came true. I wished for company and I got it. And it was all because of dad.

Dad has stroke related dementia and most of the time he is in a daze, he is sleepy, talks to himself and makes hand gestures to himself. However, he has been taking a medication called Aricept that causes him to have what we call “awakenings” where he would be back to his jolly old self for a day or two after which it would make him so tired he would sleep for 24 hours non-stop and not even get up for meals. A day or two before the “awakenings” he would also suffer from imsomnia where he would be unable to sleep for more than 24 hours. Dad would get this “awakenings” about fortnightly.

Finally after many months of this, the doctor decided to stop the Aricept because of these ups and downs. Imsomnia, followed by “awakening” followed by marathon sleep. Dad stopped taking Aricept about a month ago. The doctor said that it would take about 2 weeks before the medicine was truly out of his system.

On Sunday, dad had his first “awakening” after stopping the medication. He rang me at 7.30am. He would usually call us up to chat when he is in this state. At other times, he forgets how to use the phone. I teased him and said “Dad, you called me to wish me Happy Birthday is it?” That caused dad to called big sis up to make plans for her to bring him to my house yesterday for my birthday. I was worried because big sis is often busy and I was worried about the inconvenience it would cause her. Dad is staying with big brother and she has to drive quite a distance to pick him up and send him to my place. But she did it despite her busy schedule.

Dad knew that I love to eat durians so he got big sis to drive him to buy some durians for me. He remembered that hubby doesn’t eat much durian so I don’t often get to eat it so he said it would be a nice birthday gift. He even gave me an angpow. How sweet of him. Big sis was too tired to drive him back so she arranged for second sis to come over as well so she could send him home to elder brothers place.

So, in the end, we had a little “party”. Hubby said its ok not to wait for him to cut the cake that we had bought the evening before. So the kids could enjoy it with kong kong and their aunties.

17 thoughts on “The best gift”