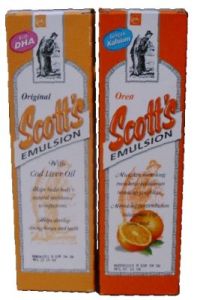 I’ve never given my children any supplementation from birth till now (they are now 5 & 7) because I’ve always believed in everything natural preferring to give them nutrition in the form of natural foods instead. However, recently, my husband and I were thinking of giving them some fish oil or cod liver oil supplements because we keep on hearing about its goodness and we remember that we used to take it when we were young.

However, I do not know much about fish oil or cod liver oil supplements. All I know from what I’ve read (rightly or wrongly) are …

So, armed with this little knowledge, I went to visit the pharmacies for a research. I saw that most supplements come in the form of little capsules or hard chewable candy type for children and most are multivitamins. Eventually I could only find two brands which I remember from my childhood days. They are in liquid form. They are cod liver oils. They are Seven Seas and Scott’s Emulsion.

Scott’s Emulsion does not state the EPA or DHA content. It merely states that it has DHA. So I skipped that even though it had orange flavour. I remember the ones that we used to take was a white coloured liquid which tasted horrible. Apparently, it is more palatable now. The Seven Seas one lists down the EPA and DHA content. EPA was more than DHA and it only comes in original and cherry flavour. I think cherry is yucky. However, left with not many choices, we decided to try the Seven Seas one. The pharmacist did recommend a brand (I can’t remember its name now) which looks like much more serious supplementation so I dare not try it.

When I was shopping for the supplements, I asked one salesperson about fish oil supple 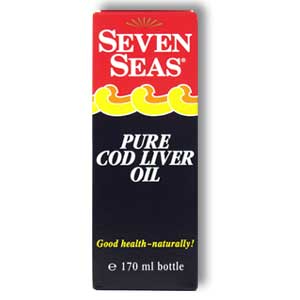 ments and I was amused when she pointed out to me a few supplements on how to increase children’s brainpower, help them study etc and say “All these are for kiasu parents.” Now, if I was a kiasu parent, I would probably have felt offended and left the shop. lol. Not a very good sales strategy, I am afraid.