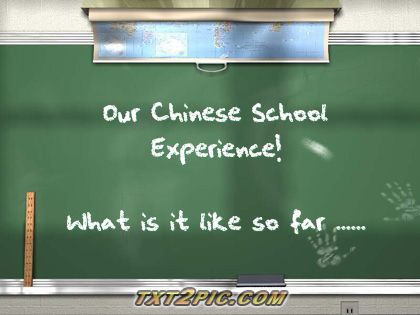 I think some of you may remember how I agonised over which school to send my kids to ie whether to send them to a Chinese school or National School. Eventually I decided on Chinese school but I was ever ready to take my kid out of the school at any prolonged sign of unhappiness. I even had an alternate school ready in mind. I was even more worried because when when we were entering the school I met an old college mate who was thinking of pulling his going to be Std 2 kid out of the same Chinese School because he was not getting along well in Chinese school after one whole year in Std 1.

However, so far we are quite ok with the school. We are coming to the end of the middle of the second term now. The homework is quite a lot but still manageable to us. The teachers are hardworking and quite dedicated (accept for the English teacher). On discipline; some of the teachers do carry rotans with them but they don’t really use it. They only use it to threaten. Most of the time, they use rewards as a motivator instead. My girl is always telling me about how she wants to get a prize for being good, doing well etc.

Sometimes she gets asked to stand up for talking too much with her partner who sits next to her or she may get her hand hit by a ruler for forgetting to bring a book but that is all. However sometimes, the teacher merely asks them to share the book with another classmate instead. No extreme punishment like standing up on the chair for the whole period or lesson. She tries to complete her homework but if she forgets or if she misses school and misses out on some homework, she is usually given a chance or time to complete it, instead of receiving punishment. My main worry was excessive homework and excessive discipline but so far so good. Not excessive.

She is doing well academically. Last term she was 5th out of 40 in her class and 12th out of 267 in Standard One, (it is not a very big Chinese school. I hear that most Chinese schools have 400 plus students) with an average mark of 97.43 for all the 12 papers she had to sit for. (yah 12 in all!) Not bad for a banana girl. She has no problems with her written Chinese papers. However, she still struggles with spoken Chinese a little bit. At first she could not understand the spoken instructions given in Chinese but she is getting better now.

Academics aside, in other areas, she has been labelled as dependant and not confident by her teacher. She is not a very bold girl but she was doing ok in kindy. She had a good rapport with her teachers then. However, I noticed that she no longer has a rapport with teachers at her current school. She has become more timid compared to before. A contributory factor could be her lack in confidence in speaking in Chinese. However, the teacher does speak to her in English most of the time at the beginning of the year and some of the time now. In kindy, she was very talkative and friendly with her teachers and was labelled as one of the “top students” in class by her teachers, and was picked to be emcee at her kindy concert.

In kindy she used to ask a lot of questions in class and was very talkative but now she is more withdrawn. I think language is the main barrier and not so much the size of the class. There were 20 students in her class in kindy and now there are 40 in her Std One class.

I noticed that in her current school, she has gone into an inner shell, not participating very much. She often comes home and talks about her group leaders, her monitors, the little “busy bees” (kids given the task to look after the cleanliness of the class), the children who got medals for sports, and those who got prizes for participating in story telling and singing on stage but she does not participate in any of them. She says she is scared. I can see that she would like to participate too but she is afraid. I do not know how to help her. I would like her to grow at her own pace and not push her to do anything she is not comfortable in doing. This is one area where I struggle with most of the time. How to help build her self confidence and self reliance. Even at home, she requires a lot of attention and is very needy.

Her classmates are mostly like her, banana kids with parents who do not understand Chinese. They speak English at home and in school with each other. Some of them are bilingual (speaks well in English and Chinese) but most of them speak English with each other. Another worry I had was that the kids in  Chinese School would turn out to be “square”, introverts who are not able to think out of the box. (Sorry, no offence here but this is what I am constantly told about Chinese School students.) However, so far from my observation, none of her classmates look that way. Quite a number of them look like intelligent extroverts accept my girl who is more timid. She is very intelligent but she is a bit timid.

Some of her classmates get private tuition from their class teacher. I think there is a bit of conflict of interest there. I prefer not to have tuition at this point. However, we do have her kindy teacher come in twice a week to chit chat with her in Mandarin just to give her some practise in speaking since we can’t speak to her in Mandarin at home. That is her “tuition”. It is more conversational but she can ask teacher about some term or words that she is unsure off. I may rope in the teacher to help go through some test papers with her before tests but most of the time, I am her tuition teacher for Chinese (I learn together with her) as well as the rest of the subjects accept Maths. Her father teaches her Maths. Then I help her to learn the Maths terms in Chinese.

As for lessons or subjects in the school, the level of English is really pathetic. So I have to teach English myself or watch it deteriorate. Most of her classmates complain about struggling in Malay as well. I find the level of Malay quite difficult so I try to teach her a bit of that too. When it comes to the 3 languages, I find that her English comes first, followed by Chinese and Malay is last. She still manages to do quite well in Malay but I think her understanding of it is poorer than English and Chinese.

At the moment, Maths and Science is still being taught in both languages ie English and Chinese in school. The level is not that difficult. I find the Maths terms in Chinese is a bit harder than the Science terms in Chinese at this stage. Surprisingly, I find that the level of Chinese in their Moral class is the hardest of all. It has terms and Chinese words that are even harder than those she learns in Chinese class. She enjoys Art and enjoys it even more when her artwork is picked to be displayed in class. 🙂

BM and Chinese papers are usually divided into two separate papers ie “Understanding” (Kefahaman) and “Writing” (Penulisan), In Penulisan, they have to learn simple sentence making or construction leading towards essay writing in later years. This part is harder but important. In addition, she has Computer, Physical Education and Music classes which she enjoys. These days they even have a written paper in Physical Education. I don’t remember doing that in my time.

I think that most of the time, parents concentrate on the Chinese leaving little time for Malay. So most of the children find the Malay hard to follow. So its really important not to neglect Malay. Its not easy teaching the kids to be trilingual.

I had heard that Chinese school requires a lot of donations from parents to survive and will constantly request for donations. However, so far, we’ve only been asked twice so thats ok with us. However, what I don’t like is the fact that the students are quite often pressured by the teacher to donate their pocket money and is labelled stingy by the teacher if they don’t. I don’t give my girl any pocket money so she is often labelled stingy.

Have I left out anything? Well, thats all I can think of for now.  What has your experience been like? Chinese School or otherwise?

20 thoughts on “Our experience in Chinese School so far…”