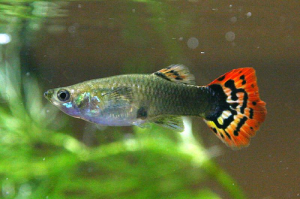 Last year, there was a fair in my girl’s school. There was all sorts of games and food at the fair. The kids had to purchase coupons and use them to play games.

When my girl came home that day, she brought along with her two little fish in a plastic bag. I didn’t know whether to laugh or cry. Although I was amused but secretly horrified (what would I do with two little fish!), the little boy was delighted. He had been reading about pets and was thinking about keeping a fish as a pet. He immediately claimed one fish which his sister generously agreed to.

Their doting dad went out to buy a small tank to keep the two tiny fish. The tank is really small, just nice for two or three tiny fish.

We called the fish “Goldie” and something else I can’t remember. I think Goldie died a few days later. So daddy had to go to the pet store to buy two more little fish. They soon died one after another in the following weeks and were replaced by two guppy fish like the one in the picture.

So now we are the proud owners of three little fish. Goldie’s first partner plus his two new Guppy friends. These three are hardy. It has been a couple of months now and they are still well and alive. The guppy fish looks an ugly grey from far but upon closer inspection, they have lovely colourful tails like that of a peacock. Goldie’s original partner has also grown in size.

The kids feed the fish once a day during lunch. Fortunately, kakak helps to clean the tank, otherwise,  I would have thrown out the fish a long time ago. 😛

You know, there is something about pets. At the end of the day, it is always the mum who has the last responsiblity of looking after the pet like picking out cat or dog hairs from the upholstery and rugs, cleaning the fish tank, making sure no one steps on animal poo, bathing the pets and the list goes on. Everyone loves pets but at the end of the day, it is not easy to look after pets. They are living things that require gentle care. So who is the nurturer at home who is good at giving gentle care? Mummy of course!

5 thoughts on “Our new pet”