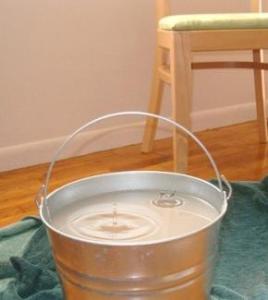 I bought an old second hand house. I did not have the experience to look out for water stains that might indicate a roof leak and so we ended up with a house with a perpetual roof leaking problem.

We did some simple renovations before moving in. The contractor was told about the leaking roof. When the renovations were completed and we moved in, the roof continued to leak. We called the same contractor back to resolve it. He came a few times. Though we felt that he should not continue to charge us for fixing the roof (since he did not resolve it in the first place), nevertheless we continued to pay him to come, just so that he would come! Even then, after that, he stopped taking our calls.

We continued to live with the roof leak problem. Then we had a new neighbour who did extensive renovations before moving in. He extended his rooms, build new rooms etc. When he was done, we had new roof leaks near the area of his extension. This time it was worse than the roof leaks from other parts of our house previously. We had to prepare buckets when it rained.

We called in  his contractor to resolve it. He came a few times. Each time we had to wait, sometimes in vain for his workers to turn up. We had to reschedule our own appointments again and again to wait for the contractor. After that….It rained once. The roof did not leak. We were happy. It rained the second time. It leaked buckets again. We were back to square one. The contractor stopped taking our calls as well.

We called in a third contractor. He came and commented about how hopeless the previous contractor is.”He uses foreign workers not like us. We do the job ourselves. We will give you a guarantee and continue to come back until your roof leak problem is over. I will come tomorrow to start work.”

“Tomorrow” came and when I called him he was obviously somewhere else doing other work. “Oh its you. I can’t come today. Maybe next week.” So much for a guarantee! Hah! He can’t even turn up at the appointed time, just like the rest. And he had the gall to sound surprised when he took the phone call from me …. as though he never said that he was coming over “tomorrow” to start work!

All contractors are the same. They do not know the meaning of “punctuality”. 10 o’clock may mean 10 o’clock the next week to them. They do not know how to keep time. They don’t call you. You have to call them to chase them over and over again. They lie through their teeth. They do not respect the fact that other people have their own schedules too. Not only them.

They are very good at one thing though. They are very good at prioritising. Priority always goes to the job that brings in the most money. So, little jobs like fixing a roof leak should be postponed again and again without care about the customer or client. They can never be found when you need them because they always seem to be multi tasking, taking on many jobs at the same time with priority to the one that brings in the most $$$$$.

I am so annoyed! I have half a mind to go and buy a ladder, climb up the roof and fix it myself. 🙁