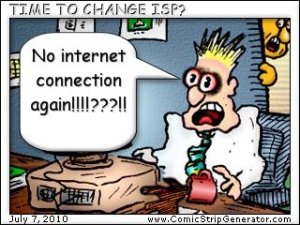 My internet line was out again, since Saturday, hence the silence. Whereas previously I would have suffered from a severe online withdrawal syndrome, this time I didn’t because after more than 4 years blogging, I have finally reached a stage where I don’t HAVE to check my blog every few minutes.

After a report made on Saturday at 3pm and several phone calls later (each lasting more than half an hour of going through the same troubleshooting drills), two men came to my house to check all the phones in my house on Tuesday at noon.

They informed us that the fault was not a physical fault on our side so they will rectify it on their end. By evening, the internet connection was restored. There was only one fault though. THEY CHANGED MY TELEPHONE NUMBER! They gave me someone else’s number by mistake.

Imagine what thoughts must have crossed that someone else when he called home to speak to his wife only to have my husband answer the call. lol.

After another phone call, they restored my telephone number on Wednesday but when “back came my old number, away went my internet connection” again.

Finally, after yet another phone call, they reopened my file which was considered closed and resolved (whatever where they thinking. Resolved? Hardly, we were back to square one). At last, by yesterday afternoon, I was able to get back online again.

That got me thinking… what ISP does everyone use? What sort of package? Care to share?

3 thoughts on “Time to Change ISP?”