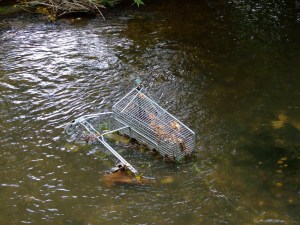 As soon as the (sometimes limited number of) trolleys arrive, the fight begins. Everyone would position themselves strategically to grab one coveted trolley for themselves. Then they rush in for the kill.

One day, just as I was about to reach for a trolley which just arrived, I found myself roughly pushed aside by a rather big sized maid. I almost fell over from this forced manhandling. I could only look at the maid in amazement, too surprised to say anything. Then I watch as she pushed the trolley to the waiting family who did not say anything.

I was appalled…. not only by the maid’s behaviour but by the family’s behaviour. They had sent the maid to do the dirty work of fighting over a silly supermarket trolley for them. I think the family should have educated the maid and discouraged her from behaving in such a manner. Instead, I was left with a bad feeling that she behaved in that manner because she either wanted to please her employers by getting a trolley or she was afraid that she would be reprimanded if she did not get one sending her to do such a desperate act. Even my maid shook her head in disbelief. It is only a supermarket trolley afterall? Why push someone aside just to get it?

Ahh supermarket trolleys, they are much sought after but so badly abused, people stuff as many things as they can in them, sometimes even allowing their child to sleep in them and when they are no longer wanted, sometimes they are dumped by the roadside in the sun and rain. What a life.

2 thoughts on “The battle over a supermarket trolley”