This year, 2012, Chinese New Year falls on 23 and 24 January 2012. That is quite early. On the first day of school, the kids were given a notice about Chinese New Year holidays and replacement Saturday class dates. They will be in school for just two weeks before having a long break again for Chinese New Year plus there will be another long weekend in early February because of the Prophet Muhammad’s Birthday and Thaipusam public holidays.

Since school has just begun, we planned and completed most of our Chinese New Year shopping at the end of last year, during the Christmas and New Year holidays. It felt funny to shop for Chinese New Year while listening to Silver Bells playing softly in the background.

I noticed many others taking advantage of the holidays to shop for Chinese New Year as well. We were a bit early, so some places did not have free angpau packets and other freebies yet. Too bad but never mind. No angpau packets, No freebies but most importantly, No rush! 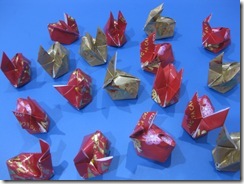 Last year I folded bunnies but this year will usher in the Year of The Dragon. I’m afraid I don’t know how to fold origami dragons and I don’t have the time this year so its store bought decorations for us this year.  I love Chinese New Year. Makes me feel like a kid again.

Leave a Reply to Mommy to Chumsy Cancel reply