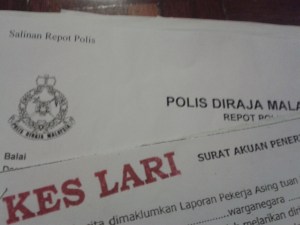 My maid had just renewed her contract with us and we had spent a considerable time, effort and money to renew her passport and extend her work permit. She went home for a holiday in July for 3 weeks and returned to start her new contract for the 5th year with us.

Then one day in October, we received an sms from her family to inform her that her father had passed away. We quickly arranged for her to withdraw some money and purchased an airline ticket for her to return home the next day. We sent her to the airport ourselves.

She said that she would need about 3 weeks to settle the arrangements at home. She was not sure exactly how long it would take but she does not think that she will stay back for the 40th day prayers. Since she was unsure of how long she will need, we purchased her a one way ticket and reminded her to withdraw enough money to buy a ticket to return here. We also told her to sms us as soon as she arrived at her hometown as we were worried about her.

She never did contact us when she arrived home. We waited 3 weeks and then we sms her sister to find out what was happening. Her sister informed us that she was sick and they needed money to send her to hospital. We told her sister that she had withdrawn some money to take home and asked what was wrong with her. Immediately she replied that she had used up all the money and had no money to come back to work. We knew then that something was not quite right as the sms were about 5 minutes apart, first stating that she was sick and needed to go hospital followed by her using up all the money and had no money to return. We did send messages a few more times after that over the next week or two to ask her to give us a call which she never did.

Sadly, our maid of 4 years whom we had grown rather fond of has just turned out to be yet another statistics, yet another ‘kes maid lari’.

First, we went to the police station to make a report. I had all the information with me, her full name, the time and date she left, her passport number etc. However, I forgot the most important thing! A copy of her passport. The passport is no longer with us of course but the policewoman said a copy of her old passport will do. She allowed us to make a report for RM2 without a copy of the passport. She only took a copy of my husband’s (the employer) I/C. She typed the report on her computer and asked us to check the details. Once we were happy with it, she proceeded to print out 3 copies and asked us to sign on it. She gave two copies to us. 1 was for us, the other was for the Immigration Department.  Note: Always keep a copy of your maid’s passport with you so you won’t have this problem.

Next, we proceeded to the Immigration Department to have our maid’s work permit cancelled. We had heard that we would be fined RM250 (even the agent confirmed it) but we had no choice. Since we had renewed our maid’s work permit, passport and she now had a valid KTKLN card plus a surat cuti from us, she could freely enter the country. We would still be responsible for her as her employers even though she was no longer with us. That is the situation if we do not cancel the work permit.

So, we went to the Immigration to have her work permit cancelled. The first thing that they asked us for was a copy of her flight ticket. (which again, I did not have with me because her flight was arranged in a hurry and I had not bothered to make a copy, I also did not print out a copy from the Air Asia website). We were told that if we had a copy of the flight ticket and if they could check that she really did leave the country, then we did not have to pay the RM250 fine! And all this while, I had the impression that there was no choice. So there was a choice, if we had the documentation to proof that she left the country. I don’t know how the check will be done or how long one has to wait because I didn’t have the airticket. When I asked whether they could check to see whether she really left the country, they informed  us that it could only be done so at Putrajaya.

Since we did not have the flight ticket with us, we were told that we had two options, 1) to pay the RM250 fine or 2) to not pay the fine (however if we did not pay the fine, our name would be blacklisted as employers and we would not be able to employ maids in the future). In the end, we chose to pay the fine.  Of course, we had a third option of going back to print the flight ticket, taking leave another day and waiting another 3 hours and perhaps having to return again another day (as I mentioned, I don’t know what the procedure will be like since we did not do this eventually due to my own oversight of not knowing)

We received a form with the ‘kes maid lari’ on it and that was that. What this means is our maid can now only enter the country as a visitor but not to work and this frees us from any further liability as employers. (Note: Always keep important documents like copies of flight tickets for Immigration Office and Police Department, even if your maid has good relations with you and is just going home for a short holiday. You never know when you will need it.)

Hopefully this post helps someone in a similar situation.