This year, quite by chance I received not one, not two but three Mandarin Oriental Mooncake Boxes as gifts. Hmm… what shall I do with all of those mooncakes. I mean my familly are over the moon with moon cakes but three, three sets from the same establishment? I guess I’ll just have to review them then, don’t I? Right, first lets have a look at the Mandarin Oriental Mooncake boxes. Ok, they’re not all like that. I have three remember? So I stacked mine up one on top of another. I guess they’ll make good looking storage boxes after we’re done. 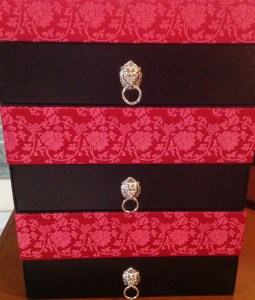 Well then, let’s have a look inside. Ahhh… fortunately when we looked inside, they weren’t identical. We had two with four boxes inside and one with six boxes inside. 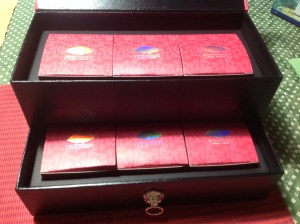 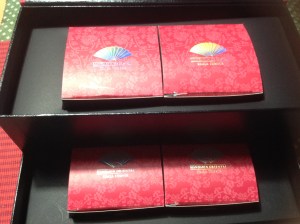 Mandarin Oriental Mooncake Flavours – What sort of flavours did we get? In the four box one, we had lotus paste with one yolk, lotus paste with double yolk, chicken ham mixed nuts and green tea charcoal. (I’m rather partial towards the green tea and charcoal one because I love green tea. ) While in the six boxes one we had dragon fruit flavour, durian flavour and white lotus paste. I guess that the four box one would appeal more for the older more traditional folks. It is traditional with a twist of modern. I am not sure but usually one gets to choose what sort of flavours you wish to include in your box.

In the older days, people prefer giving and getting the double egg yolk ones because they’re supposed to be more expensive and more generous of you. So many people like to give those as gifts but I personally don’t like receiving those. We always end up digging out those yolks. What a waste. However, many people like to play it safe and give away these kinds of traditional mooncakes. The six box one was more modern but not forgetting the traditional with the inclusion of white lotus mooncakes.

Younger folks are more adventurous and like to try all sorts of flavours and combination of flavours. The durian one was just so so. I don’t like durians in mooncakes, well not that much but I can’t resist durian in any form. Still I’d much prefer durian in their original form. The dragonfruit mooncake was nice in color but it didn’t taste anything like dragonfruit, not even a whiff. The lotus ones were nice but not exciting and to my surprise, I liked the mixed nuts mooncake the best of them all. Actually I hate mixed nuts mooncakes but this one was just right. Not oily, no strong spice smell and with lots and lots of nuts and not too sweet. Perfect. On one quarter of a piece I even had about 4 whole almonds! Now, I’m nuts over their chicken ham mixed nuts mooncake.

Now, the pictures. Unfortunately I didn’t manage to capture a picture of the dark green and black green tea and charcoal mooncake before it got devoured. I love green tea and they taste good too in mooncakes. I’m going to enjoy the rest of my mooncakes now. 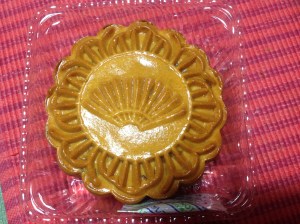 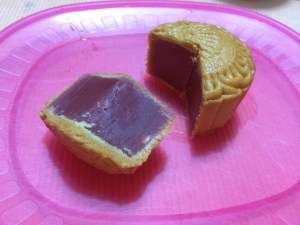 Mandarin Oriental Dragonfruit Mooncake. Could not taste the dragonfruit. 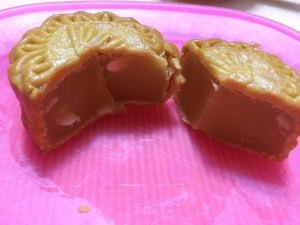 Mandarin Oriental Durian Mooncake. Nice but I prefer the real thing, durians that is. 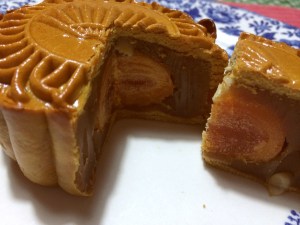 Mandarin Oriental Lotus Paste With Single Yolk Mooncake. Good but I prefer without the yolk. 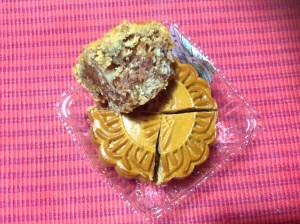 Mandarin Oriental Chicken Ham With Mixed Nuts Mooncake. Perfect, even though I hated mix nuts mooncake to begin with. 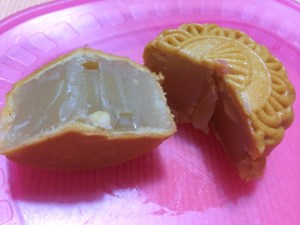 Mandarin Oriental White Lotus Paste Mooncake. Nice. I like that they’re mini ones so they’re not too heavy on the palate.