Before we could finish eating our mooncake from my previous post, we received a box of Shangri-La Hotel, KL mooncake. We got a traditional one with lotus paste with yolk and white lotus paste. These are good for older folks who do not like the new varieties of mooncake but hey, I’m not that old. Only 50….

Anyway, here is the ‘unboxing’ of our Shangri-La Hotel mooncakes.

It came in a nice paper bag that matched the cover of the mooncake box. 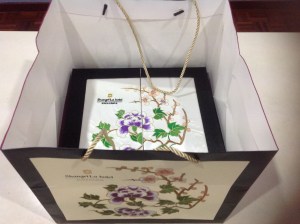 You know, when it comes to mooncakes, the box usually cost more. Every year, all the hotels and restaurants and bakeries will try to beat each other in designing the most beautiful and creative mooncake box.  You have mooncake boxes that pop out, slide open etc. I’ve damaged quite a few in my feeble attempts to pry them open the wrong way.  I was curious to see what this one will do. 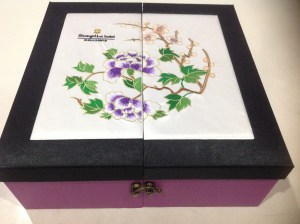 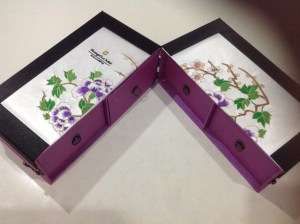 You can slide it all the way, till it forms a straight line with four drawers. Hmmm… cute but the pretty design at the top gets broken into two as well. Pity. Designers take note. 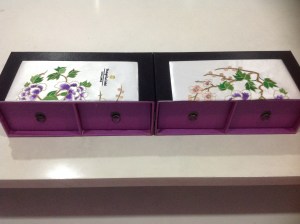 The mooncake box looks like this when straightened all the way

Open up the drawers and hey, pretty baked mooncakes inside another paper box within a plastic case. 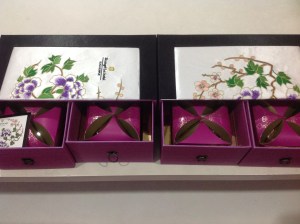 Here is a closer look at the pretty baked mooncake. 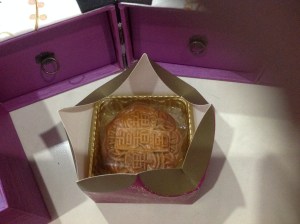 I won’t be writing about the mooncake taste today because I still have to finish eating up our Ritz Carlton KL, Li Yen Restaurant Mooncakes. ~~Fly me to the moon~~