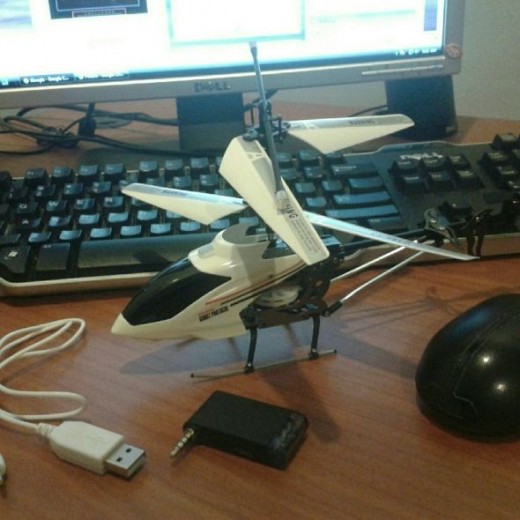 Some models of the iHelicopter can be used on Android phones too. They all have their own apps which can be downloaded for free either on the App Store on Apples iTunes Store or on Google Play store for Android phones.

The iHelicopter that I won is from Happy Cow. It is a 3 channel helicopter for flying indoors. I have placed the iHelicopter next to my computer keyboard and mouse so you can visualize the actual size.

I Won A Gyro i-Helicopter Controlled By The iPhone, iPad or iPod

A few months ago, I bought the DVD of the Mission Impossible Movie Ghost Protocol. In it, was a little contest form. I saw that the 2nd prize included an i-helicopter so I sent the contest form in to the organizer. All I had to do was answer a question from the movie. I didn’t think that I would win but since it only costs me mailing cost for the letter, I decided that it was worth a try.

To my surprise, I won 2nd prize. I won a limited edition Ghost Protocol T-Shirt, 2 messenger bags, 3 note books and the i-Helicopter. What a thrill.

My husband who loves RC helicopter was happy too since we had crashed our two previous RC Helicopters.

My husband loves RC Helicopters. We had two before this one. We bought it for the kids but were keen to play with it ourselves. Our previous helicopters were remote controlled ones. One was an indoor remote controlled helicopter while the other could be used for outdoors.

Unfortunately, we’re not very good at flying the RC copters. The indoor one kept on diving into walls and ceilings and eventually its blade broke. We didn’t have the heart to throw it away so it sat on the shelf collecting dust and finally we discarded it.

The second RC helicopter we had was slightly better. It was an outdoor one so we didn’t have to worry about crashing into walls or ceilings. However, it crashed into trees and dropped into drains and soon that was discarded too.

This i-helicopter is our third one.

The Difference Between The iHelicopter and The RC Helicopter

The i-Helicopter is our third helicopter. We decided to give it a test flight before showing it to the kids. As before, we crashed into ceilings and walls and by the time we got the kids to have a look at it after giving it a second charge, it could only sit on the floor turning around and around. Unfortunately, we had damaged one of its motors during its maiden flight.

With a tweezer and some tweaks later we were finally able to fly it after a few more tries. The kids were quite thrilled with the lights on the helicopter. They switched off all the lights in the house so they can admire it better. At one point, the man had to fly the helicopter manually with his hands but after a few tweaks it can fly now and the kids managed to control it. However we have yet to feel any satisfaction from flying it.

I guess it is not the helicopter’s fault but rather from our poor piloting. We need more practice. I am glad the i-helicopter came with spare rotors in case we damage them during flight.

To me, there really isn’t much of a difference between i-helicopters and RC Helicopters.

Both have long charge times and short flight times. Both can be hard to control if you are not experienced users. Both have small parts that can damage easily upon hard impact.

However, the iHelicopter has an edge over the RC helicopter because it can be controlled by motion using gyro technology. It uses the iPhone as controls (all you have to do is plug on the transmitter) so its fun and easy and charging of both the helicopter and the transmitter is through a usb cable.

I like the rc helicopters that looks like a ufo flying ball because it protects the rotor blades. If you fly enough remote control helicopters you will realize that when the rotor blade goes, so does you helicopter so it is important to get strong, sturdy ones.

In real life, I think you will need lots of practice to fly an rc or iHelicopter really well. Younger children or even teens may require the supervision of an adult.

Verdict Or Conclusion About The iHelicopter

We Have Yet To Fly Our Helicopter Satisfactorily

I feel that the i-Helicopter is a big boy’s toy. It will make a good Christmas or birthday present for a big boy. Kids will need supervision to fly. Do expect crashes and difficulty in maneuvering and parts breaking and lots of frustration as well. This will happen unless you are an experienced flyer. They always make it look so good and easy to fly in demos. In my experience, learning to control the iHelicopter takes time and practice. I wish it would hover in the air so I can fly it forwards and back, left and right but it never does that, it seems to have a mind of its own.

My husband loves RC Helicopters and now the iHelicopter. The kids do too but it is too hard for them to control. This is the same whether you are using i-helicoptersor RC Helicopters. You need flying experience before you can control one really well. We haven’t gained enough flight experience yet and it is hard to do that on long charge times and short flight times. When you can’t control your helicopter properly, you will crash it causing damage to the parts. However, I like it that you can use the usb cable to charge up the transmitter and helicopter. The motion control is another extra if you can learn to use it well. I haven’t at this point of writing.

I think I’ll stick to RC Cars. They last a lot longer. Now they even have iPhone Controlled Cars as well.